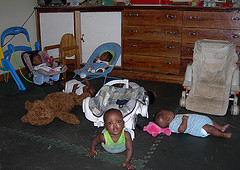 Adoption is a lasting process that bonds birth families, adoptees and adoptive families forever. Just like the other processes that have to do with family matters, adoption has a number of effects that can be seen in this triad relationship. The adoptive parents, birth parents and, of course the adoptees, are extremely affected by this condition, thus one should understand each other to make the adoption process and the relationship smooth as possible.

Let’s take a look at the results of adoption to these triad members.

Some Effects of Adoption to Birthparents

Numerous researches have revealed that on the part of birthparents, the ones who are greatly affected by adoption are the birthmothers. One of the most heartbreaking outcomes of adoption is so far the tendency of birthmothers to have an intensive monologue with the fetus during pregnancy. This may also include that common fantasy of mothers in which they and their newborn baby can be saved from the relinquishment.

Other than those mentioned effects of adoption, several studies tell us that about 60% of the birthmothers felt that they were pressured into giving up their babies. 40% of these mothers have felt surrendering their newborn infants against their desire. Of course, most of these mothers are unwed and according to them, they were forced to surrender the babies for adoption as they were advised not to come home until they get rid of the problem. As you may know, bearing a child out of wedlock is not tolerable by society, and this is by far one of the most common factors that trigger birthmothers to surrender their babies for adoption. So sad, but so real!

Some Effects of Adoption to Adoptees

Well, according to some researches, one of the most noticeable consequences of adoption to the adoptees is vulnerability. Adoptees are shown to be vulnerable, thus a unique pattern of behavior is often noticed. Many experts label this behavioral change as the “”adopted child syndrome””.

After knowing the adoption, the adopted children tend to show off certain disabilities in learning. A few of the experts consider this as an organic brain syndrome. Relative to this, most of those mental health professionals who have conducted studies on the effects of adoption were surprised to detect an alarming rate of their patients who happen to be adopted children.

There are other well-known effects of adoption to the adoptees, including the tendency to seek for alternative lifestyles, difficulties with alcohol abuse and drugs, eating disorders, infertility, untimely pregnancies, attention deficit disorder, and worst of all, suicide.

Some Effects of Adoption to Adoptive Parents